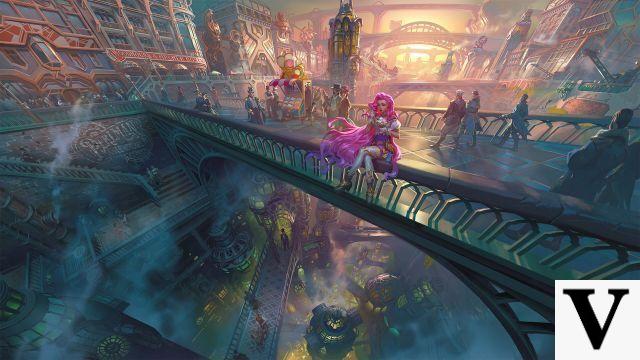 Zaun and Piltover sing to each other.

Piltover sing to each other. The refrains are riddled with ancient wounds, injustice, and pain. I think only I can hear it, but we all feel it, a hum behind the day-to-day that drives the Zaunites and the Piltovians into strident disagreement.

I know you can sing together. I've heard it. At least some fragments, sporadically; little chords that make my heart flutter at the possibility. And once it was a beautiful, crushing wave of harmony and hope. It was the moment when I heard my hextech crystal for the first time.

The voice sang thousands of hymns at once. Each was a pebble in an avalanche, impossible to understand outside of a few isolated notes. The voice could hear me, and I was dying to keep listening, but it became a confused humming again as Zaun and Piltover finished their symphony.

Here on the Mezzanine, where I hide in the dark behind the stage, that duet should be heard clearly. The top of Zaun; the bottom of Piltover. The Calima persists and fouls Piltover's worked bronze. Zaunite chemists spread the colors of Piltovian crystals through the cobbled streets of Zaun, carefully crafted with Piltover tools.

And the inhabitants of both cities make their way, forming that euphoric song that only I can hear. Zaunites rise from below with a thousand different instruments strumming with out-of-tune enthusiasm. The children provoke and tease each other, while the older ones escort them, looking for a moment of peace. Piltovians march from above in roiling waves, curious, clever and proud. They use the elevator, or the stairs and ramps that connect the place with the Malecón above, the elegant Piltovian twin of the Mezzanine. They laugh and joke, pointing in awe at the charm of our makeshift open-air theater.


At first, it is exciting. I am so happy that you are all here. I close my eyes and sharpen my crystal, begging him to speak again.

But the crystal emits that same song, a distant humming, a presence that is there and at the same time is not. Even that fades and murmurs when the songs collide, and the duet turns into a duel. Piltovian laughter turns into ironic discomfort. The Zaunite screams subside to growls of outrage. Also, almost as if they had planned it, the crowd is organized into two perfect halves.

This is what it means to live in Zaun and Piltover. The Mezzanine is a meeting place, there is no doubt about that, but it is not a meeting place. It only exists because cities have to touch at some point. I watch as one of the Piltovians trips and almost crosses that perfect space, but two of his friends grab him and return him to the safety of the herd.

Agh! They are all here for the same reason! Why can't they just relax for, I don't know, a second and just hang out with each other?

Why do I always think that will change? I am just one person. Just Seraphine. The one who, for years, could barely leave her house? How am I supposed to make them understand that everything can be different? Why do I think I can do it?

Why did I ever think I could do it?

The lights come on, and the impact makes me realize that I had been holding my breath. I feel a chill down my forearms, and I hold the microphone with a shaking hand. I look at the audience. There are some cheers, but most of them are focused on not breaking the line that separates them from the other side. Respite.


A familiar and pure note of soul music resonates with me from the Piltovian crowd. I glance over and see Schala's tired smile, shining for me from a crowd that disappears for a moment as I am captivated by her song. During his visits to my parents' store, Schala would tell me about his thesis, and he would read entire passages to me with the same enthusiasm that a willing parent would read a storybook. She would tell me what had changed since the last time she was rejected by the university. "The seventh time is the charm," she told me the last time we spoke. But, even back then, he could hear the doubt behind his optimism. Six rejections and still she was looking forward. But he did it in a cloud of doubt: maybe he should be doing something else with his life?

His insecurity nests in mine, and the next inhale comes more easily.

Another song joins the tune, this time from the Zaunite crowd. I look over there and see Roland, a true silverware artist. The sound of music was what attracted me to his little workshop for the first time. She had stacked boxes and supplies on one side of the workshop to make room for a group of children to use the other half in what appeared to be a band rehearsal. He said the commotion helped him focus, and that he needed sound more than space. He also said that he could use to get used to a smaller space in case his next design doesn't sell.

Roland's song mixes with Schala's in my head: one, drums and metal and gravel; the other, wind and horns and murmuring voices. They couldn't be more different, but something made everything work somehow. A song full of insecurity; the other, of fear of the future.

But there was something else. A strong, booming and infinite beat that prevents songs from skidding on single, dying notes. Both songs have the same time signature. Schala loves his job, and Roland his.

His determination meets mine and brings it out of the dark.

The next inhale is sweet.

I don't need to solve everything. I'm not here for that. Neither do they, and that's fine. I listen for the crystal, and its steady rhythm grows and rumbles, confused but present. I want to achieve it and I only know one way.

I close my eyes and let the songs of Schala and Roland wash over me. I imagine their difficulties. Schala biting her pencil until her eyes widen in an epiphany and writes the perfect conclusion for her thesis. Roland, with one eye closed, carefully putting the finishing touches to an ornate silver frame, then walking away with a smile and a sigh knowing it was perfect. Little explosions slide down my shoulders, up the back of my neck to my head, and the music engulfs my entire body in flames.

Perhaps our voices are silent separately. Maybe mine is. But I am not silent. We are not silent. I don't keep anything, because I know they don't either. Panic, fear, insecurity. I turn it all into a song, a lot, so much that I want to cry. Our songs are raindrops on glass. Schala's song swirls with mine, and we become a small stream. We meet Roland, who is happy to get caught up in our move. Together, we find the crowd, each drop joining another and another and another, until we are a tide of music and feeling.

That tide grows stronger and stronger as the crowd, silent except for the surge of their souls, opens up to the music. At another time, I would have gotten lost in this sound storm. But I have Roland and Schala, and I have myself, and we feel what they feel. They know what drives us, what drives me. I am so grateful. I'll make sure they know it too. I push that feeling down to a single note, and in that moment, I know the music we're making could pierce the sky.

The song ends and I open my eyes to look at the crowd. A single entity welcomes me, strident, cheering and overflowing, and approaches the stage. Not a cobblestone in sight. My muses met in the middle of the crowd, and I can no longer distinguish one side from the other.

The Mezzanine is a beautiful place. I got the best table in the place, in a hidden little corner where a lucky customer can sit in secret silence, sip a cup of hot tea, and watch the world go by.

My show ended a few chimes ago, but the crowd remained, chatting and laughing with each other. Local merchants seized the opportunity, opening shops and taking tables and chairs out onto the street. My stage, turned off and set aside, became a makeshift playground, where Piltovian and Zaunite children challenge each other to mischief. I feel the charge in the air, the excitement and wonder, and that ethereal feeling that comes over you when you don't want the day to end.

I sit back, put both hands around my steaming mug, close my eyes and smile. Together they make wonderful music. Piltover and Zaun continue in their duet, at least a little longer.

A familiar voice resonates within me, distant but urgent. My soul soars as my heart begins to race. I do not know what I will hear, if we will understand each other this time or for how long. I just know that it needs to be heard.

His song rises in an orchestral surge, and I brace myself for the onslaught. It has a lot to sing, and only I can hear it.

But I will never stop trying to listen. ▲ UP ▲