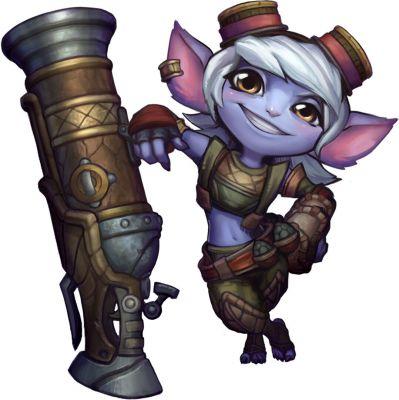 The fire crackled incessantly and spread a warm glow throughout the forest clearing. Tristana was laying back with her head resting on her backpack as she watched the wake of a comet in the starry sky. The lights tinkled very beautiful through the blanket of birch and oak leaves. Humans like to name the patterns in the stars; she had seen some in an old book from Heimerdinger's lab, but decided it would be more fun to give them her own name.

The fire crackled incessantly and spread a warm glow throughout the forest clearing. Tristana was laying back with her head resting on her backpack as she watched the wake of a comet in the starry sky. The lights tinkled very beautiful through the blanket of birch and oak leaves. Humans like to name the patterns in the stars; she had seen some in an old book from Heimerdinger's lab, but decided it would be more fun to give them her own name.

"You'll be The Grumpy Badger," he said as he pointed towards a group of stars. "And you can be The Cunning Chameleon." Yes, they are much better names than El Guerrero or El Defensor. Besides, I can't even imagine them anymore.

His stomach growled and he stood up. Hunger was still something that took her by surprise, even though she had already ventured further out of Bandle City than any other of her own. A couple of impaled fish were deliciously roasted over the flames and the smell they gave off made her mouth water. He fired at them in the creek to the west of the camp with a single coldly calculated shot from his cannon. Not bad for a shooter, if she had to decide. Too bad no one was there to see it! He reached down and patted the polished draconic wood frame of his fine handcrafted barrel, a weapon that any observer could tell was too large for someone his diminutive size to carry as well as fire.


"Leave Teemo with his nice blowguns, huh, Boomer?" He said to his cannon. "I'll keep something with a little more power, thanks."

The fire burned in the middle of a circle of rocks with cerulean flames thanks to a pinch of their special powder that he had sprinkled on the wood before lighting it. She knew how little she needed to wear after using it for the first time in the Highlands, which cost her her perfect pair of eyebrows. Sometimes it was difficult for him to remember that things were different in the human world compared to home.

When he saw that the fish was ready, he slid one from the grill onto a wooden plate that he took from his backpack. He unwrapped a knife and a golden cutlery from a dream leaf and cut the fish into chunks. She may be on a mission, but that doesn't mean she has to eat like a savage. He took a bite of fish and rolled it in his mouth as he savored it and licked his lips in satisfaction. Mortal's food was normally bland compared to the range of flavors she was used to, but fish in this part of the world,

Ionia, it wasn't that bad, she heard. Perhaps it was that magic filled every element of this landscape that made them extra delicious.

Tristana heard the crack of a branch. One of many he scattered around his camp. The sound and type of branch told him exactly how far away the humans were and in which direction they were heading.

He cleared his throat and said, "I've got another fish, if you're hungry."

A man and a woman emerged from the forest in front of her. They were both tall, slim, their hands waved restlessly, and they had cold eyes. They didn't look friendly, but she was just learning to read human expressions, and she learned that she should always be polite. Human languages ​​are so unsophisticated that they always made her wonder how they managed to communicate at all.

The man stepped forward, and said, "Thank you very much, old lady, but we are not hungry."

The man blinked and she saw that what was in his gaze was possibly confusion.

"The old hag is crazy," the woman said as she glanced at her, as if she didn't know what it is. Whatever it was, it wasn't his true form ...

"You really don't want some fish?" Tristana asked as she took another bite. "It's quite delicious."

"We're sure," the man confirmed. "But we will accept any currency you can share." Besides that weapon of yours. I imagine it would make good money at the auctions.

"You want to sell my Boomer?" Tristana said as she felt movement from somewhere. "I don't think that's possible, eh?"

-No? You're alone and there are two of us, ”the man said. "And we are bigger than you."

"Size isn't everything," Tristana said. "And there are four of you." Why don't thieves tell their friends to get out? Maybe they are hungry.

The woman shook her head. "He already told you, we are alone."

"Oh come on," Tristana said. "What kind of agent would I be if I didn't know you have two other friends in the bushes targeting me right now?" They came from the north and parted a hundred meters before arriving. There is a fat man to my left and another with a crutch to my right.

"You have good ears for being so old," the man replied. "I already told you I'm not old," Tristana said. "In fact, I am quite young for a yordle."

The man's mouth dropped open in amazement, as if something about her had become apparent in that moment.

Finally! An expression that even she had no trouble deciphering.

Tristana ducked and turned to dodge a pair of black arrows coming from the bushes. They flew over her without causing a scratch as she grabbed Boomer and loaded a projectile. He fired into the bushes and his reward was a cry of pain.

“Get out!” He yelled as he leapt over high ground toward the nearest tree. Tristana landed on a branch in the middle of the trunk. Another arrow flew towards her, which landed in the bark a few inches from her head.

"Wow, you're pretty fast for a human," he said as he loaded the barrel with more ammunition. He leapt onto another branch as the archer came out of the bushes — the fat one — which made him a very easy target. Tristana jumped from tree to tree and fired two more shots. Both shots hit the man in his fleshy legs, and he fell groaning in pain as the arrow flew into the air.

"Oh, don't be a crybaby," she laughed. "I barely scratched you!"

Tristana fell near her campfire as the first two humans she had seen were heading towards her with drawn swords. They might be fast for humans, but, to her, they moved like clumsy giants.

"Time to get this over with!" Tristana yelled as she discharged the rest of the cannon into a

powerful blast towards the ground. He gave a loud, savage cry as he flew over their heads. Even while in the air, he was already reloading the next ammunition. He pulled himself off a tree trunk and pirouetted toward the ground.

He fell right behind the bandits with a laugh.

Tristana fired two shots, and both humans fell in pain after being hit on their backside. The woman fell on her face as her butt burned with gunpowder. He managed to get to his feet and fled into the bushes with his butt on fire. The man writhed on the ground and tried to walk away while Tristana loaded another ammunition.

He made strange gestures with his hands, as if they were some kind of magical protection.

"It's what I told you all along," Tristana replied.

The man opened his mouth to reply, but before he could speak, the arrow that had been lost in the sky fell back to the ground. It dug into the man's chest, and he succumbed with a look of intense pain.

The other two bandits tried to flee as fast as their injured limbs allowed them. He let them go with a smile as he put his things away before putting out the fire.

"I was just trying to eat dinner and have a quiet night," she told herself. "Although, I guess now that there are four bandits who won't bother anyone anytime soon, it wasn't too bad!"

Tristana hung Boomer over her shoulder and set off once more as she whistled a cheery tune and searched for more stars to christen.