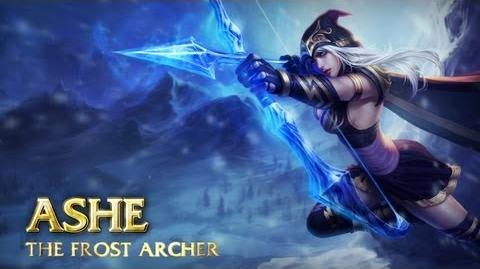 With the Freljord event nearing its end, this edition of the Champion Spotlight focuses on one of the leaders of the three tribes. Aim with a

giant ice arrow plunge your enemies into icy oblivion with

With her full arsenal of utility and opponent control skills, Ashe can harass her enemies in the laning phase and dish out heavy damage, complemented by the fact that she is considered one of the best.

initiators of the game. Ashe demonstrates her natural ability for evasion with

Shock offers you an efficient surge and the active effect of

Falcon Shot allows you to sneak up for an ambush. Uses

Enchanted Crystal Arrow to initiate combat or eliminate an opponent with a shot from the other side of the map.

Check out the video for tips, tricks, and runes and masteries hints for Ashe, an icy character focused on Attack Damage.

Use of skills Use of master's degrees Use of objects Counter