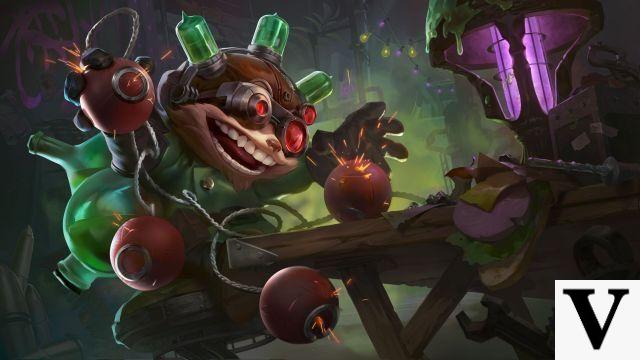 Zaun. I'm already here, I'm hairy and I'm dying to blow up anything.

I spent a lot of time out in

Heimerdinger hid me behind all that useless glamor and never let me do what I wanted ... And the only thing that left me was a huge appetite for KA-BOOM!

Jinx was right? Is the sad, stinking suburban district brimming with explosive potential?

No, I am not crying. It's just the Calima de Zaun that got into my eyes.

Heavens, the things that must be in there… But it looks so normal. Even boring. There are no flashing lights or bright signs… just a bunch of old bricks and iron. It's like nobody cares how a bomb is made. And it's quiet ... OH! They sure soundproofed it for all the bomb tests! I have to enter! Oh, I bet there's a super-secret passageway ... or maybe you have to blow up the front wall or ...

Ah, wait, there is the door.


Wait, what is this?

Can not be! Why? How? How could they leave this holy place? How can anyone show so little respect towards the creation of the beautiful explosives and shut this down for good and…? What's that noise?

I think I'm seeing a couple of angry young humans. And there are no bombs. Humans. In an empty room. Pretty boring. At least they haven't seen me.

"This is disgusting," says one. It seems that he shares my same disappointment. "You said there would be bombs everywhere." We are already looking everywhere and there is nothing! -.

The other kicks an empty box. "And how was I to know they had taken everything ?!"

Did no one read the sign? I swear, humans never pay attention ...

Not before me, today I'm not in the mood for them to play with my fur. See you guys!

Wow, I can't believe it. My first adventure in the suburban district and I find a bomb factory! Specialized in making bombs! It could have been my home. But no, it was more like the home of broken dreams.


I'M GOING TO LEAVE THE PLACE FULL OF BOMBS!

Ah hello! Welcome to my laboratory. Well, it's more like Jinx's. Let me stay here while I find a place in Zaun. She thinks I only exist in her head, so I guess I don't take up much space. Plus, with the piles of junk and piles of garbage everywhere, I'm sure I'm not the only furry thing around this place.

What, these? They are just a few hexplosives that I am working on. They are of their own design, obviously.

These imps will give that old factory the goodbye it deserves. He will leave with a little dignity.

I can't leave her as I found her, waiting for another hopeful innocent arsonist to arrive and break her heart without giving her a single spark. It was a real mix of emotions.

I call them chain smokers.

I'm almost done. I just put this here and this over here and… Perfect.

Let's blow up some things!

Well, I'll go back to the building. Poor sign of —PROHIBITED THE PASSAGE—, it is useless.

My little chain smokers are in position, ready to show Dad what they can do.

But, Ziggs, you say, how are you going to appreciate the results of all your talents if you can't see them in action? I was thinking exactly the same thing. I have an extra surprise for all of us: I'm going to blow up the front wall first!

This projectile over here is called the Spoiler, and it will create the ultimate opening!

That? I have to get out of here right now, I don't want to blow up!

Hey, why did the yordle cross… oh no, what are those guys doing there ?! They are going to eat a whole handful of the wall if they don't get away. Go away. Go away!

They don't go away. They are painting the wall. For the love of…

"Hey!" I yell at them from behind the junk pile. -Kids! Get away from there!

Yes, I got their attention. A real Ziggs, in the real world. Although they are still there, immobile.

-That? They had never seen a yordle? Really, get moving! They are going to get hurt!

Are they ...? Yes! They are laughing at me! Well, maybe it's best to let them explode, after all! Jinx sure would.

Ahhhhh, yeah. Jinx is a psychopath.

And I'm running I'm running right over to where those brats are. Better to get hit by a yordle than crushed by a building. That's my motto.

We hit the other side of the street as the wall goes up.

It is mesmerizing. Little lightning bolts hitting every surface. Bricks falling apart. There is smoke everywhere and it engulfs the inhabitants who stopped to watch.

Wait, why are all these people looking at me and not my work?

The roof came down. It's magic. No, I already told you, it's the Calima! I'm not crying.

Haha! Yes! I can't help it. I'm going to make my dance happy. That was perfect!

Those two guys are looking at me like I've slapped their grandmother. I suppose the Zaunites are more used to collapsing buildings than happy furballs.

My chain smokers worked perfectly; what was once a solid structure is nothing more than a heap of blackened rubble. That useless "NO ENTRY" sign sticks out of the roof debris. I'll take it as a keepsake for the lab.

Ah! One of those naughty hexplosives was waiting for me to see everything from the front row. I think I'm on fire, but ...

... And all eyes are on this furry rocket.