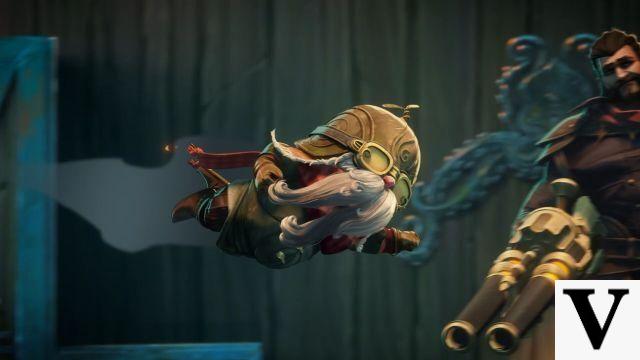 Corki, the Yordle pilot, loves two things above all else: flying and his glamorous mustache ... though not always in that order. After leaving Bandle City, he settled in Piltover and fell in love with the wonderful machines he found there. He dedicated himself to the development of flying contraptions, leading an area defense force of veterans known as Howling Serpents. Corki, who remains calm under enemy fire, patrols the skies around his foster home and has never encountered a problem that a few missiles cannot solve.

Heimerdinger and his colleagues Yordle emigrated to Piltover, opting for science as a way of life; thus, they did not take long to bring different revolutionary advances to the techmaturgical community. What yordles lack in stature, they have more than diligence. Corki, the Daring Bomber, earned his nickname by directing one of his contributions: the original design of the Reconnaissance Combat Helicopter, an assault aerial vehicle that went on to become a key part of the City of City Expeditionary Force. Bandle (FECB). Along with his squad, the Howling Serpents, Corki soars the skies of Valoran, surveying the territory and performing stunts for the enjoyment of the curious.

He is the most respected member of the Howling Serpents, both for remaining calm in the most adverse situations and for displaying courage that borders on folly. He went through various periods of service: he used to go as a volunteer on missions that took him behind enemy lines, both to obtain information about the adversary and to do mail work in hostile areas. The risk made him feel alive and nothing pleased him more than fighting a good aerial fight at dawn. Corki, who was not only gifted for fighting, made various modifications to his helicopter, to which he attached an entire arsenal; something that, according to many, he only did to show off and not to fight better. When enemy fire ceased, he was forced to retreat, a situation that made him feel as if his engine had been snatched away and his wings clipped. He kept performing stunts and flying through the canyons, but it wasn't the same without the invigorating scent of gunpowder wafting around him.