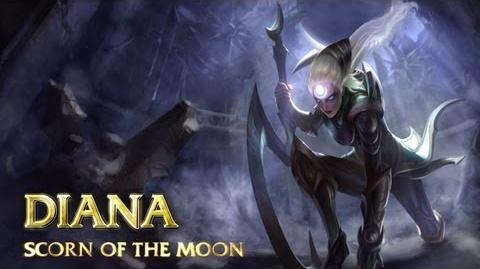 Diana is a melee champion who focuses on AP damage. This champion specializes in Jungler although he can also go in Top or Mid, it is viable with both, but there may be some difficulties in Top. As an Assassin, Diana has great potential against weak targets. When Diana has an advantage over other enemy champions, she can eliminate in a single combo. You can also stick to them thanks to Fall of the moon e Moon Boost Unlike other Assassins, it is quite a tank because of its shield Pale Waterfall and this allows you to stay in the TeamFights.

Spells can be Ignite and Flash Diana's main hit is her Q (Increasing Blow) to harass the enemy. Already at level 6 he can prepare to do Diana's combo, the essential thing would be to hit him with Diana's Q (Crescent Blow) so that then you give him his R (Lunar Impulse) to stick to your enemy without problems, then you activate the W ( Pale Cascade) along with E (Moonfall) if it escapes. Because it is essential to hit Diana's Q, so that later you give her the Ulti and she does not have a cooldown. When your enemy returns to base or you kill him, check your amount of life and mana to see if you can gank any lines to help your Team.

Diana in the Jungle starts with W to have the shield last longer, and of course start in Blue because Diana depends on Mana to make her abilities. Then we have to maximize the Q. Already at Level 6 Diana can easily gank on the lines for her ulti, but to gank you have to have the E. Diana can jungle faster with her ulti, since the Q rebels them with Moonlight and send the R and have no cooling.

Links That Could Help