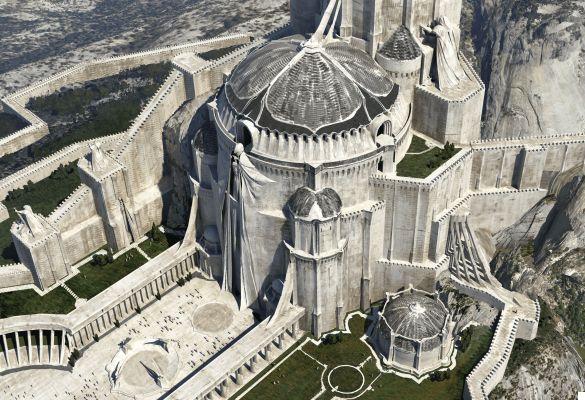 The man Fiora was going to kill was called Umberto and he seemed very sure of himself. She saw him talking to four men, so much like him that they must be his brothers. The five of them behaved in a presumptuous and arrogant manner, as if to appear in the Hall of Swords to respond to Fiora's challenge had been an attack on their dignity.

Fiora was going to kill his name was Umberto and he seemed very sure of himself. She saw him talking to four men, so much like him that they must be his brothers. The five of them behaved in a presumptuous and arrogant manner, as if to appear in the Hall of Swords to respond to Fiora's challenge had been an attack on their dignity.

Dawn pierced the long windows with spears of light and on the pale marble the reflections of those who had come to witness the end of a life trembled. They numbered by the dozen, including members of the two houses, lackeys, onlookers, and people who simply hoped to appease their impious appetites with a bath of blood.

"My lady," said Ammdar, Fiora's second brother, as he offered her a

Medium-sized rapier on whose blued steel blade the light moved as if it were oil. "Are you sure about this?"

"Of course," she replied. "Haven't you heard the stories told of Umberto and the braggarts of his brothers in Commercia?"

"Yes," Ammdar acknowledged. "But is the crime so serious that you must pay for it with your life?"


"If I let a single offense go unpunished, others will think they are free to unleash their tongues," her sister said.

Ammdar nodded and took a step back.

"Then do what you have to do."

Fiora stepped forward, her shoulders moving in circles and sliced ​​through the air a couple of times with her sword, signaling that the duel was about to begin. Umberto turned when he noticed that one of his brothers nudged him and Fiora, enraged, noticed that he was giving her a hungry look from below the neck. His adversary drew his own weapon, a long and handsome Demacian cavalry saber with golden hawks and a sapphire inside the pommel. The weapon of a vain man, not appropriate for a duel.

Umberto assumed the position and made identical movements to hers. He leaned down and winked at her. Fiora felt her jaw clench, but she swallowed her displeasure. A duel was no place for emotions. It clouded judgment and had killed numerous swordsmen in the face of lesser adversaries.

They began to move in circles around each other, with the choreographic movements of two dancers in the first notes of a waltz. The purpose of this routine was to ensure that the participants in the duel were aware of the significance of what they were going to do.

The rituals of the duel were important. Like the Rhythmic Step, they existed so that civilized people could preserve an illusion of civility by killing. Fiora knew they were good laws, just laws, but that didn't change the fact that she was about to end the life of the man in front of her. And since he believed in those laws, he had to make his offer.


"Good sir, this is Fiora, from House Laurent," he said.

"Save that for your gravedigger," Umberto replied.

Ignoring the childish attempt to enrage her, Fiora continued:

"It has come to my attention that you attacked the good name of House Laurent in an unjust and dishonorable manner, spreading malicious falsehoods regarding the legitimacy of my lineage." Therefore, it is my right to challenge him to a duel to wash the honor of my house with his blood.

"You've come to die," Fiora promised. "Unless you decide to refrain from fighting and give me satisfaction for your offense."

"And how could I give such satisfaction to my lady?" Asked Umberto.

Given the nature of the offense, allowing his right ear to be cut off.

-How? You are crazy woman?-

"It's that or death," Fiora replied with the same calmness as if they were talking about the weather. "You know how the duel is going to end." Giving in isn't embarrassing at all.

"Of course I do," Umberto said, and hearing it, Fiora realized that he believed himself capable of defeating her. Like everyone else, he underestimated her.

"Everyone here knows my prowess with steel, so the choice is yours: to live bearing the wound as a mark of honor ... or to be fed to the crows tomorrow morning."

Umberto's anger at what he perceived as his opponent's arrogance overcame his fear and he pounced on her seeking her heart with his sword. But Fiora, who had been aware of the attack before she executed it, took a slight turn to the left and let the blade only bite the air. This done, with a precise movement, he raised and lowered his diagonally. The crowd held their breath, overwhelmed by the brush of blood on the stone and the shocking brevity of the duel.


Fiora turned as Umberto's sword bounced clatteringly off the granite cobblestones. The man fell to his knees and then squatted, his hands clutching the wound in his throat from which blood was pouring out.

Fiora greeted him with a bow, but death had already begun to cloud her eyes. He did not enjoy killing like that, but the fool had given him little choice. Umberto's brothers came to collect the body and Fiora could perceive their astonishment.

"How many go with that one?" Ammdar asked as he approached to pick up the sword. -Fifteen? Twenty?-

"Thirty," Fiora replied. "Or maybe more." I can no longer distinguish them.

"There will be more," her brother promised.

"So be it," she replied. "Every death restores the honor of the family a little." Every death is a step toward redemption.