Who I am
Lluís Enric Mayans
@lluísenricmayans

Un Monster is a special kind of unit in League of Legends. Monsters are neutral, which means that they do not fight for either team, and they will not initiate combat with a champion unless they are attacked.

Note: Monsters should not be confused with minions, which are not neutral and follow a predetermined trajectory from their team's nexus to that of the opponent.

Monsters reside in the jungle and will not move from their designated camp until attacked, in which case the monster will pursue the nearest champion, up to a certain distance from its point of origin ("leash" distance); If the monster runs out of targets or its leash is dislodged, it will return to its original position, rapidly regenerating its health. If attacked on his way back, he will turn to counterattack the champion. Since monsters always attack the closest champion, they will change targets if the champion moves away and another champion is attacking. Monsters have a target change counter, if their target changes 10 times, the monster will return to its point of origin even if it is attacked, recovering all its health at a high rate, making it extremely difficult to kill for a few seconds.

After a camp has been completely "cleared", it will remain empty for a period of time that varies for each camp (called a respawn time), then all of its monsters will respawn. 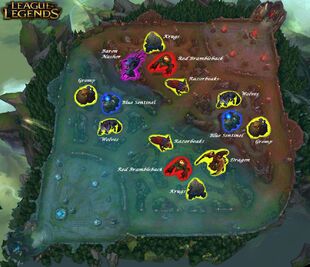 This map shows all the camps

In Summoner's Rift there are 14 camps:

In the Twisted Treeline there are 7 camps.

As a general rule of thumb, as with any other killed unit, killing a monster rewards your killer with gold and experience points. Experience is split among allied champions within 400 unit range, with gold going to the champion who delivered the final blow. And like minions, the gold and experience reward for slaying monsters increases as the game progresses.

Additionally, certain monsters offer higher rewards, such as an upgrade or global gold reward (some rewards go to the entire team, some only to their living members). Some of the granted buffs can be stolen by assassinating the enemy champion who owns it.