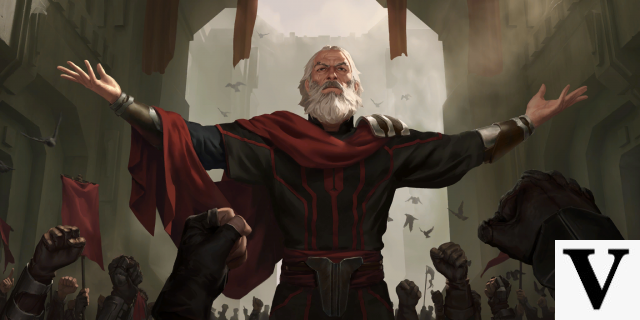 Citizens of Noxus! I bring news from the capital!

Noxus! I bring news from the capital!

It's time for celebration! !

The Hand of Noxus has returned, and is alongside our new

Great General! With the noble houses united behind them, a new era begins for our glorious empire!

Let the word spread that, from now on, from afar

Shurima to the shores of

Ionia, the countless wars started by Boram Darkwill have come to an end. The money from our treasuries will no longer be wasted on the promise of uncertain victories. Our brave warriors will no longer have to sacrifice their lives in vain, receiving nothing in return.

Noxian Gold and Noxian Blood. These are the treasures that Jericho Swain has sworn to return to you, the people.

During his campaign in the northern lands, the powerful General Darius was ordered to resign. Instead of cowardly accepting this edict, he marched back to the capital with all his battalions, since the duty of the Hand of Noxus rests primarily with the empire itself, and not with whoever it is to sit on the throne. , over time. It was just and necessary that he question those orders and the authority that issued them.

Spread the word that General Darius met General Swain. And let it also be known that Darius is convinced that the strike against Boram Darkwill was fair and in accordance with the law, and that Swain's actions were for the good of all of Noxus.

With the protection of Darius and his battalions, representatives of all the noble houses have gathered to hear Swain's plans for the future of Noxus. Those who have sworn perpetual loyalty to him, in their own name and that of their houses, have received unconditional forgiveness for any mistakes they have made or resistance they have interposed. These men and women are proud and honorable servants of the Great General, and must not be harmed.

With his boundless wisdom and mercy, he also offers mercy to those who have rejected his benevolence. They have seven full days to terminate their activity within the empire, surrender their lands and titles, and leave Noxus forever. Those who choose to remain in defiance will give up their lives, and public trials will resume at the Noxkraya Arena three days after the deadline.

But the previous Grand General was not a bad man, and Swain will not remember him that way. On the contrary, he was a weak man, manipulated behind the scenes by others ...

Yes, my friends. There is corruption within our great empire. Corruption has grown for centuries, gushing out like a

beautiful flower for all to see, as its roots twisted and spread in the subterranean darkness.

No more, my friends! No more! Jericho Swain will annihilate whoever tries to exploit Noxus for his own unspeakable benefits! He will root out the corruption, that infectious rose full of thorns! Henceforth, each of its agents and allies will be considered enemies of the empire, and all good citizens are bound to stand up to them, to the best of their ability. Together we will win! No one will be free of suspicion!

Before Boram Darkwill, even the greatest kings and champions of the Noxii were puppets of these sinister forces, even from the time of the Runic Wars. In fact, our beloved Grand General has heard the fears of the noble houses: if anyone can fall into corruption, why wouldn't he fall too? To that end, he has decreed that Noxus be ruled not by a single individual ... but by three. Inspired by the legacy of the greatest tribes of antiquity — the vision of the Noxidi, the strength of the Noxkri, and the cunning of the Noxtali — he will create the council —Trifarix—, whose members will not aspire to any throne, and will represent the principles of strength that have allowed Noxus to triumph over his enemies.

Finally, spread the word that, after a series of consultations with his dear friends in the nobility, the Grand General has reconciled with the leaders of the Assassin Guilds. Along with Swain and Darius, there will be a place for them on the council, in what will be a representation - anonymous - with the aim of protecting the empire from cunning threats from within.


Go ahead, citizens! Make these words and proclamations known to all! The best years of Noxus are before us. We must rise as one people, united for purpose and glory, once again!

ARCHIVIST NOTE: Despite the inspiring and conciliatory promises contained in these official proclamations, in the span of just one year, the Trifarix completely altered the political landscape of Noxus. Governor posts and military commissions were no longer hereditary, but assigned through official procedures. All personal assets were declared and verified, and considerable taxes were imposed on all gold and silver that were not deposited in trust in the state banks. Finally, it was declared illegal for a citizen to be owned by another, and the death penalty was established for the sale or transfer of persons.

Effectively, Jericho Swain seduced the noble houses to set foot in the assassin guilds, then systematically dismantled the power structures that had sustained them for nearly a thousand years. While the repercussions of this remain to be seen, it is likely that many nobles have been forced to ally themselves with their clandestine enemies and prepare a rebellion. ▲ UP ▲