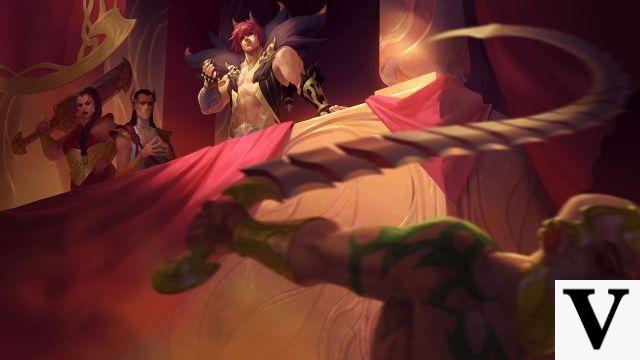 Sett, one of the leaders of Ionia's growing criminal underworld, rose to fame after the war with Noxus. He started out as a lowly fighter in the Navori fighting arenas, but soon gained notoriety for his savage strength and ability to withstand seemingly endless punishment. After rising through the ranks of local fighters, Sett beat his way to the top and is now the one who runs the arenas he once fought in.

While he is now a linchpin in Ionia's burgeoning criminal underworld, Sett's origins were humble. The son of an Ionian vastaya and a Noxian human, the "mixed-blood beast" child was an outcast from the start. His birth scandalized his mother's Vastaya community, who expelled the family for violating tribal rules. For their part, the humans of Ionia also did not accept this taboo union, although Sett's father's bad reputation as a fighter in the local arena served as an incentive for them not to voice their disapproval.

What little security the family enjoyed vanished the day Sett's father disappeared. Suddenly, all those who had bit their tongues at the sight of young Sett felt free to express their contempt. Confused, the boy wondered about his father's whereabouts and why it seemed as if trouble suddenly haunted him.


Sett grew up fast, became numb to the taunts and threats he endured, and before long, began using his fists to hush up the insults. Every time his mother found out about their fights, she made him swear that he would not go to the Noxian arenas where his father used to fight.

But the more Sett fought, the more he thought of his father.

Longing to find the man she barely remembered, Sett sneaked out to the sand one night while her mother slept. He was immediately captivated by the show. Many Noxian soldiers, new to the shores of Ionia, roared from the surrounding stands, thirsty for blood. Down in the center of the arena, fighters from all sides and from all martial disciplines engaged in gruesome duels with a wide variety of weapons. The winners were well paid in Noxian currency. When the event ended, Sett asked about his father and learned the terrible truth: he had bought his contractual independence and left to fight in more profitable arenas abroad. He had abandoned his family in search of wealth on the other side of the world.

Furious, Sett asked the arena organizer to let him fight, hoping that his father would return from his tour to meet him as his opponent. The organizer assigned the boy a fight the next turn, thinking he would be easy prey for one of his star fighters.

From the moment he threw his first punch, the "bastard boy" became the sensation of the arena. Although Sett had no formal training in martial arts, his innate strength and ferocity compensated for this condition; he equaled his more technically trained opponents by savage beatings. Without giving up the hope that one day he would face his father, he soon became the irrefutable "king of the arena" and earned a juicy chest full of prize money, as well as a slew of bankrupt opponents.


Night after night, Sett brought money and other comforts to his mother, always lying to her about how he got them. Sett's callous heart softened to see her so proud of her accomplishments and to know that she no longer had to submit to petty jobs. Still, he felt like he could try harder. Being the king of the arena was good, but the real money was earned by the owner of the arena.

One night, after defending his title in front of an unprecedented audience, Sett made his new demands on the Noxian organizer and his henchmen. He suggested they give him control of the arena and its winnings. When they refused, Sett blocked the doors. A few minutes later, the Noxians emerged from there, badly injured, with a message on their bloody lips: the mixed-blood beast was the new boss.

Without the promoters, Sett took over the arena he once fought in. The Ionians, who had just had a taste of war, were cramming the place and paying to satisfy these cravings they just discovered they possessed. Sett took advantage of his new thirst for blood and accumulated more money and power than he could ever imagine in his childhood fantasies. He transformed the arena into the center of a clandestine empire of gambling and vices.

The beast that triumphed in the arena now takes on illicit enterprises with the same heavy hand. Every time someone challenges his authority, he personally reminds them who is in charge. Each punch from Sett is a blow to his former life of poverty and ostracism; thus, it ensures that that past does not re-emerge.

"Who is guarding the cash register?" -I ask.