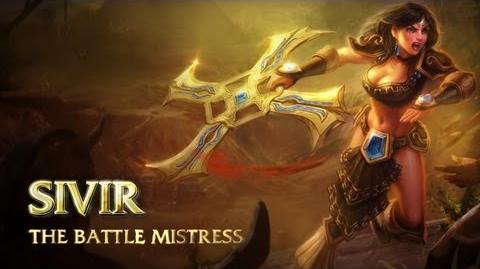 Sivir has a significant burst at low level if you know how to combine Q and W with Auto Attacks.

Take advantage of the poke offered by the Q that has a high rank, if it is seen that the Minions behind (the magicians) are low on health, aim to hit those minions with the Q and at the same time try to hit the Q on an enemy, in this way you secure a Farming and a Poke.

Whenever you can, try to launch the combo at a low level: AutoAttack the enemy champion, before the animation ends, press the W and throw Basic W at once and the Q back, in this way you hit a minimum of 450 damage (if you can make the Q come back and hit it back).

Sivir's ultimate is good for starting team fights. It has a lot of synergy with characters that run or fast start and delete, such as Hecarim, Vi, Rammus, Singed, Alistar, Thresh, Nautilus, etc.

The disadvantage of Sivir is that it has little range at a distance, so it will depend on the positioning to be able to hit the Q without problems and take advantage of the burst of the W, considering that only the E can block a CC, try to block the CC the opponent's strongest or the most damaging skill. If they do not have initiation, you can activate the ultimate to kite better. Sivir is a very good kite character who facilitates passive and Ultimate.

Stay away from assassins as he is a character that does not have jumps or safe escape. Your only defense is E and ultimate.

Against Zed, when he ultes Sivir, before the animation of the activation of the mark ends (when the shadows appear, before they cross you) press the E and prevent Zed from activating the ultimate on you.

Sivir's main Counter is Twitch (due to the poke with the poison passive and the difficulty of not being able to correctly dodge with the E the activation of its poison).

Other difficulties: Nocturne (The nightmare of all ADC, it is difficult to dodge this champion, you just have to avoid being placed by Dread, if not you get rid of it). Garen (If a silence hits you, you're dead). Ezreal (He has too much Pokeo and with the E you can dodge one skill but since he has another 3 to use you are useless and on top of that with the last BUFF it is almost impossible to hold more than 2 skills in Mid Game, save the E to dodge Ezreal's Ultimate ).

Against Caitlyn it is the easiest, you have free mana, so you can buy 5 potions of life and stay online until minute 20 if necessary, you regenerate mana with Caitlyn's traps and, if you are smart, you will save the E to dodge his ulti. The only disadvantage is the rank of Sivir compared to Caitlyn, the latter has the highest rank, so the pokeo battle is difficult to win because Sivir only has the Q with more rank than Caitlyn but the latter has rank with basics, rank with the Q and rank with the Ultimate. With a medium-aggressive support you can easily beat him.