After casting 3 spells, Sona's next attack will deal bonus magic damage, plus an additional effect depending on the last song Sona activated.

Sona plays a tune that deals magic damage to the two closest enemies. Additionally, Sona temporarily creates an aura around her that empowers both herself and her allies, charging her next basic attack with bonus magic damage. Helping an ally with the aura briefly increases its duration.

Sona plays a tone that heals both herself and the closest wounded allied champion. Additionally, Sona creates an aura around her that briefly shields her and her allies. Helping an ally with the aura briefly increases its duration.

Sona performs a song that speeds up her movement speed. Additionally, Sona creates an aura around her that briefly accelerates allied units. Helping an ally with the aura briefly increases its duration.

From the beginning of the game, Sona works best by operating close to her allies. In this way, their auras help to exchange more effectively, with

Hymn of Valor by increasing your marksman's attack while enhancing your own stalking.

Aria of Perseverance heals more on low-health allies, so while filling an ally's health bar is relatively inefficient (particularly with her high mana cost and low base values), save her

Power Chord offers some tactical options as well: The

Aria of Perseverance reduces damage from opposing marksman attacks if used correctly, while Sona can pursue escaping enemies or escape ambushes with her

In team fights, Sona's small auras allow her to remain mobile to

heal and shield and

Grant power to your allies while they need it.

Song of Celerity grants significant movement speed, and approaching allies with the edge of her aura allows her to extend her own duration. And while she previously depended on

Flash to position with your

ultimate, sudden speed improvement in your

Crescendo, which is still just as powerful and with the same potential to turn the tide of a game as before. Once cast, Sona works best at healing and shielding her most fragile allies with

Aria of Perseverance while wearing

Hymn of Valor to improve the damage of your allies.

Note: Due to being one of the first champions released in the game, Sona's video presentation is in English. 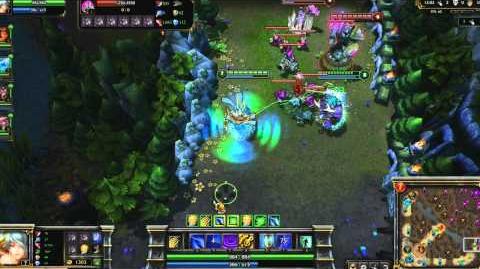