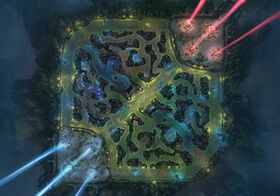 Summoner's Rift is the most used and default Field of Justice in the game.

The oldest and most widely used field of justice is known as Summoner's Rift. The rift is located between the Freljord and the Serpentine River. Summoner's Rift is one of many locations on Valoran where magical energy is powerful and highly concentrated, making it a highly sought after and desired location by magicians. Historically, the forest where the rift resides was the site of severe battles during the runic wars. Currently, it is the battlefield that all aspiring summoners want to reach.

The goal of Summoner's Rift is simple: destroy the enemy nexus. To get there, the champions must cross the different lines or lanes (lanes) where they will fight against the enemy champions to destroy the turrets, two per line (four per line in total), until they reach the enemy base. The strength of the turrets grows according to their proximity to the nexus.

On the map there are 3 lines: top (the top line), mid (the middle line) and bot (the bottom line); besides the jungle.

In this line, one or two players can go. The top line is perfect for characters like the following:

The mid line is the loneliest on the map. In this line, the players face off one-on-one.

Bot is the most cooperative line of the three. It depends on two specific characters.

The jungle is full of darkness and monsters to kill. The jungle territory is perfect to hide in the brush and attack the rivals in a line from the brush by surprise.