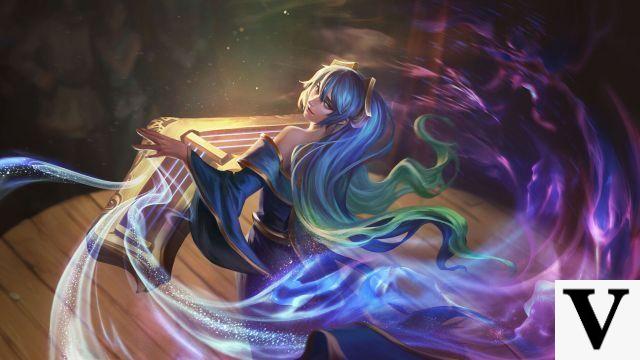 That old, familiar scent was the first thing he noticed.

That old, familiar scent was the first thing he noticed. Hay, strawberries and robust wood. In the courtyard of the Posada Argenta a peculiar current blew that brought to mind the pain of memories that seemed to be overcome: hundreds of concerts, thousands of faces illuminated by flashlights and, what hurt the most, a time when everything was simpler and happy in

But these days, that version of his homeland felt far away. Worlds away. When she saw her old friend Etra walk through the inn door, she held her breath; perhaps this had also changed. But Etra's eyes widened in amazement. He screamed with excitement and ran over to where she was to wrap her in a hug. Sona let out a small sigh of relief. Some things don't change after all.

"You got my letter!" Etra said and squeezed it tight.

Sona nodded. When Etra released her, he stepped back to get a better look at her, still holding Sona's hands. "It looks like someone has been traveling," she said, impressed. As if realizing that Sona was irritable, Etra stopped, released her hands, and turned to the rudimentary sign language they had created throughout their lives. Everything is fine?

It was a relief to be signed again. To be understood by someone who loved her. Yes, of course, Sona replied, whether or not it was true. Even though I missed you horrors. He lowered his hands a little. He did not want any passerby to see his brusque gestures or finger movements and draw the wrong conclusions.


How long will you stay this time?

As much as I can, Sona gestured. You know I can never say no to an empty stage.

There were no spectators on that evening when Sona struck her first note, but the first ones quickly approached. He was standing front and center of the Posada Argenta "concert hall": a converted barn with a raised wooden platform that served as a stage. Some of the faces he saw were familiar. They brought their plans for the night with them: wine by the stove and cheese on cheesecloth.

Sona placed her etwahl center stage. The burnished gold on its front glittered with luster. It was placed on his small base, the one he had only worn for his presentations in Demacia. To Sona's right, a man named Cal kept the beat on the inn's goatskin drums. Etra's voice, sharp, clear, and smooth as water, joined him a few moments later.

As they immersed themselves in their familiar rhythms, the audience multiplied. The wagons stopped in front of the open doors of the assembly hall and the horses were tied to the posts. Some spectators began to accompany with a strong song. They got drunk faster than usual. Sona smirked at Etra, who responded with a gesture: They missed you too.

There were times of great tension for people. A single bloody year was enough for them to lose their king and watch their nation attack itself.

As if to illustrate Sona's thoughts, four figures with loose hoods over their heads stepped into the last rows of the audience. Dark blue fabric hoods. Not that it was very suspicious in itself, but ...


One of them nodded at Sona and she could see the flash of a gold mask.

Sona felt a knot in her stomach. He heard an almost imperceptible stumble in Etra's voice, but neither of them dared to look at each other directly at that moment.

The only option was to get on with the act, keep singing, and hopefully keep up appearances. The next song in the repertoire was a solo. Etra and Cal left the stage behind.

This was the moment that the audience had actually come to hear. Faint whispers of approval could be heard from the audience as more people entered. The piece had no name, but still everyone knew it. It was the creation of Sona, who relaxed as she immersed herself in its melody. His fingers brushed the strings, the air filled with silence and, with the sound of a single note, he began.

His fingers danced like fireflies. The song flowed, formed, faded, and formed again.

But then something changed in the music. New layers appeared in it, notes that should not be able to be played at the same time. Sona looked up to find only smiles and closed eyes. The audience was delighted, engrossed.

It was the moment. The etwahl had awakened. Elongated, kinky illusions spilled from the strings, stretching and snapping as the air itself hummed. For her they were radiant: a language that only she shared with the instrument. No one else could see them.

The etwahl chose someone. An old woman in the back of the room was thinking of her husband, a farmer, and the instrument grew hoarse, taking on the gravity and warmth of her voice. Sona could almost hear him speak. And in the shapes that alternated with speed before her, she could see the contours of his weathered face, the way his cheeks creased as he smiled. But the contours were transformed ... into the fuzzy shape of a sleeping figure. He had fallen ill and died a month ago. The harvest was tough without him, no doubt.


Then the etwahl sang something intimate to Sona: the last song the man had sung hoarsely to his wife. The notes floated in the air. He took the individual phrases from the melody and, without even needing to stop, wove them into his song and continued to create around them. Looking up, Sona saw the widow's eyebrows rise as she recognized the melody; Tears rolled down her cheeks.

The music was now in full swing. She and the etwahl were deep in conversation. The shapes had expanded, they were bright and they were moving without stopping, an aurora was spreading across the hall ...

A scream shattered the song. She stopped, frozen. But the forms continued to drift, no longer secrets between her and the instrument.

He had lost control.

The wizard hunters in the background had risen to their feet and moved into the central space of the hall. They were coming for her. Some took off their hoods. The rest of the audience was still rapt, blinded. They still did not realize what was happening. Sona took two steps back, toward the archway that led to the back of the barn.

“Halt!” One of the wizard hunters yelled. There was no doubt that they were coming for her. She ran deftly, lifting her skirt with one hand. The etwahl shuddered, broke free from its base, and followed her through the air. Why keep hiding it?

He went out the back, into the darkness. There was an alley back there; she could flee into the woods before they reached her. But when he reached the end of the alley, two wizard hunters cut him off. He stopped short and spun around. Maybe… No. Three others blocked his return to the inn. I was surrounded.

"If you don't resist…" one of them began, but as soon as he saw the glow of Demacian steel in his hand, he heard nothing more. Behind her, a few footsteps. They were getting closer.

She backed against the inn wall as the five mage hunters stood in front of her.

He put his hands on the etwahl. I hope Etra ran away, he thought.

The etwahl blazed. Threw a

violent burst of music. The chord shot out and slammed into its pursuers. The air was filled with a repulsively radiant gold. They covered their faces. When he heard her moans, her broken screams, she knew it was all over.

Now they danced, all of them. They were a terrifying sight: contorted, twisted figures bending against their will like marionettes. As far as I knew, it was painful. But he needed to hurt them. He had to make the pain the only thing they could remember. That way, they couldn't remember Etra. They couldn't look for it.

At first, they begged him to stop, but a few moments later, even that was gone and only their moans, the movement of their feet, the creaking of their joints could be heard. He didn't want to hurt them, he thought. I never do it. But you… you are the reason my home is no longer my home.

One last measure. One last song. He tore up his notes. The chord reached them in shades of deep purple. They fell to the ground instantly like discarded toys, unconscious and forgetful.

And Sona vanished into the silence of the woods. ▲ UP ▲