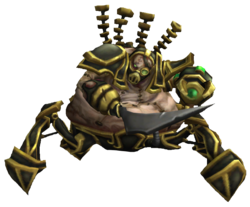 There are warriors who are magnified by their strength, their cunning or their skill with weapons. Others simply refuse to die. It is possible that

Urgot, once a great Noxus soldier, falls within the latter group. With a certain tendency to plunge headlong into the battle line, he wreaked havoc among the enemy ranks where he often suffered serious injuries. When his body could no longer bear abuse, the crippled Urgot they delegated to him the position of Great Executioner of Noxus. By then, his hands were shattered and he could barely walk. Scythe-like grafts, attached to his crippled limbs, served him to carry out his bloody work.

Finally, Urgot he met his death in the moment that should have been his greatest hour. Due to his military background, he used to accompany detachments to foreign territory for trials. After ambushing an enemy force,

Jarvan IV, Crown Prince of Demacia, fell into the clutches of the division of Urgot. Since he was too far from Noxus to risk transporting his trophy for rescue, Urgot he set out to kill his captive. However, in the final moment the Dauntless Vanguard led by

Garen, the Power of Demacia, and Urgot he was sliced ​​in two by the fervent warrior as he made his way to free his prince. In recognition of his services, the executioner's remains were sent to the Shadow Academy for resuscitation. However, a lifetime of abuse had left his body in a sorry state, which added great difficulty to the work of the necromancers. Professor Stanwick Pididly, a leading Zaun expert, offered a solution. In his laboratory, a creepy new body was forged to Urgot. Now half man and half machine Urgot He has come to the League of Legends in search of the man who ended his life, fueled by the necromantic energy that runs through his metal veins.