Co-op vs. AI is a game mode in League of Legends where a team of players take on a team of computer-controlled champions commonly known as bots. The size of the team is the same as in normal player versus player matches, but the variety of game modes has been reduced. 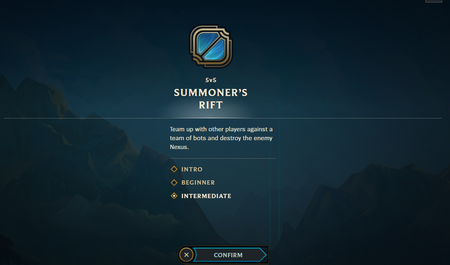 Co-op vs. AI It is available in Summoner's Rift and Twisted Treeline. There are three difficulties to choose from: Introduction (SR only), Beginner, and Intermediate. Players can queue alone or in groups, and they are combined in a similar way to normal games. However, players are ranked by level rather than their matchmaking ranking. The First Victory of the Day mission is available, and normal and ranked MMRs are not affected.

Co-op rewards against AI are slightly higher than custom games, but lower than normal or ranked matches. The current rules for Co-op vs AI rewards are:

There is a group of 68 champions that bots can be chosen from. They are as follows, listed in categories according to five main roles: [1]

Bots have different behaviors and advantages depending on the selected difficulty. Some behaviors are standard, regardless of difficulty selected. Most notably, bots will not seal or chase creep upgrades, although bots on the Twisted Treeline map will actively acquire pad and altar upgrades located around the map. The other universal behavior is a faster revive time if killed. Bots will occasionally chat at the beginning and end of games.

Co-op vs. AI was first announced on the League of Legends website on January 20, 2011, as a new game mode intended to demonstrate a more difficult challenge and training method for players rather than just the bots available through of the custom game option.

A fight was announced on February 4 showing a fight between some of the new bots against mid-level Riot employees that will take place on February 9. This battle was streamed via Own3d, and resulted in a close (and incomplete) victory for the Bots.

It was meant to be released the week after patch 1.0.0.111, but it was delayed because European servers weren't ready to take on the increased stress that the gameplay could cause.

It was finally released on Thursday, March 10. It supported two difficulty settings, Beginner and Intermediate, and a group of 12 bots available only in Summoner's Rift.

Rise of the Bots update

This update was rolled out on April 16, 2014, within patch 4.5. New features and updates include the following:

Additionally, the developers made a blog post to explain the reasoning behind the changes.