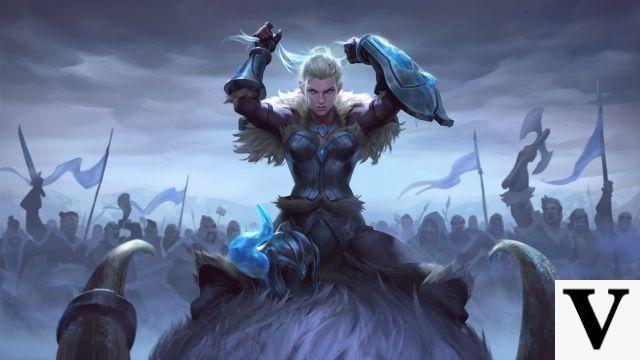 Sejuani drove the ax into the trunk of the tree.

Sejuani drove the ax into the trunk of the tree. It took five hits to knock him down; cutting down a dozen trees had taken her breath away. The cold enhanced the strength of the Daughters of Ice. No wonder the southern heat weakened her.

His weary looters cheered. Despite being only around a hundred, its roar echoed through the hills.

Stealth was no longer necessary. The southerners had formed an army of several thousand and were less than half a day's walk away. Lurking enemies watched them from the surrounding peaks.

The main group of Sejuani's forces was far to the north, busy with the chores typical of the summer: fattening cattle, fishing, and hunting. He had scattered small war groups along the border

Demacian to destroy villages, burn crops and topple fortresses. His expectations were on the arrival of winter, when his entire horde would destroy these weakened lands and continue their invasion to the south.

Kjelk Scarred Maiden approached Sejuani. Like the rest of the invaders, he rode a drüvask, a boar-like creature larger than any ox.

"Matriarch, the enemies are gathered on the other side of the river!" Kjelk said, bringing his massive mount to a halt.

"Show me," replied Sejuani, who jumped up on his own drüvask,

Bristle. It was twice the size of the other animals of its kind and as wide as a mammoth.

Together they headed up the hillside, leaving in their wake warriors who tied logs to build rafts. Sejuani followed Kjelk along the riverbank until sweat soaked the backs of their mounts.

Along the stream of a waterfall, just three hundred paces across the river, the Demacian skirmishers emerged from the forest that had hidden them and descended from the bare rocks. It was a vanguard army attacking from the flanks made up of hundreds of archers and spearmen. They looked at the two Freljordian women on their drüvasks, but continued on their way.

"Svaag!" Sejuani spat into the running water in front of her. During winter, swamps, lakes, and rivers like this one became frozen roads for his swift battalions to march.

Hearing the sound of a horn, Sejuani knew that he did not need a scout to know that the main forces of the enemy army were already here. He turned and could see their gleaming armor on the peaks behind them. The Demacians' plan was clear.

If his battalion tried to cross the river in rafts, enemy skirmishers would launch a shower of missiles on them to cut their numbers in half. Then, positioning themselves in the highlands beyond the bank, the spearmen would control the survivors long enough for the main forces to catch up and take down.

Resentful and furious, Sejuani spurred Bristle forward. The gigantic beast ran; he roughly crossed the undergrowth and undergrowth where the rafts waited.

Most of the warriors had already sighted the enemy forces and were preparing to flee along the river bank. Fear had gripped them: they feared not battle, but the trap set for them by the Southerners.

"The enemy will send horsemen to block any escape routes along the riverbank." We cannot face the army coming down from the hills. We must cross. Now, ”Sejuani ordered.

He took a small piece of wood wrapped in leather, smaller than his thumb, and placed it in his mouth. Then he unrolled his huge flail, Winter's Wrath. Each link in the weapon's chain was the size of a person's hand. At the end of the chain hung a gigantic shard of Pure Ice, the largest shard most had ever seen. Its magical cold emanated a misty vapor.

Sejuani bit down hard on the leather-wrapped fragment to endure the pain inflicted by the weapon's magic. There is always a price to pay for wielding Pure Ice. The cold froze his arm. He was dying with pain. The tears from her crystalline eyes froze like diamonds on her cheeks. However, his warriors could only perceive a grimace of determination and rage. She waved her weapon in front of her before slamming it into the water.

An ice bridge formed but, as expected, it immediately broke amid the warm currents. He would not stand the passing of his war group.

Across the river, a few arrows flew in his direction. The archers were testing their range. Few reached the land, but he could hear the scorn of the Southerners.

Sejuani pushed Winter Wrath aside, spat out the wood fragment, and removed his helmet. Then he unwound the string of wolf entrails that he wore on his wrist. Seeing this gesture, his own roared in approval.

A deep chant began. Freed from fear, the warriors knew they were witnessing something special. Sejuani was taking the holiest oath of his people.


I would tie a knot of death.

She undid her braids and nimbly tied the wolf's entrails into her hair. She wondered how many times she had taken a death oath. A dozen times? More than any warrior known to have ever done. At some point, he would either fall in combat or fail. Would today be that day?

Arrows began to hit the shore around him as he tied the knot. In response, some of his warriors shot arrows at the enemies, but the wind was against them.

"I am Sejuani, matriarch of the Winter's Claw!" I am the Wrath of Winter! I am the Mangual of the North Winds! ”He yelled as he tied the last triangular knot in his hair. "Even in death, I will protect this shore until they have safely crossed." This is my oath! I see the

His warriors cheered; the voices grew more and more hoarse as they tried to lengthen the sound. Many cried with emotion: Sejuani had sworn to save their lives, even at the cost of his.

He didn't have to give them any more orders. They readied their weapons and climbed into the rafts. They would cross as fast as possible. Hopefully, they might arrive in time to save her.

Sejuani placed the piece of wood and leather back between her teeth. With her fingers she touched the rough hair on Bristle's neck, who didn't need an oath or a word to understand her determination. The beast growled and turned to face the water.

Again, he took the Wrath of Winter and brandished it. Exhausted and sore, sweaty from the heat, Sejuani plunged her weapon into the water.

An ice bridge formed over which Bristle sped forward. The ice cracked and tilted, but his mount did not stop.

The arrows were heading toward her; It was no longer the isolated and exploratory shots of before, but a black rain. Sejuani held up his shield, but even so, a few arrows dug into his shoulders and thighs. Dozens of arrows pierced Bristle's skin.

When he was barely halfway across the river, the bridge collapsed and they both fell into the water.

Bristle tried hard, desperate to keep them afloat above the surface. The arrows kept falling. The distant shore had disappeared. All Sejuani could see was a storm of black projectiles and the water turning red with Bristle's blood.

The huge beast howled; her crying was like a tempest mixed with a childish wail. He spat and babbled. Without thinking, Sejuani leaned towards him. He protected his torso with hers. With his shield he covered the face of his mount to alleviate his suffering.

At that moment, he thought: Maybe our death will come today.

Suddenly Bristle was able to hit the ground below. Instead of drowning, the beast strode to shore.

Sejuani stood on her mount and brandished her flail in front of her to launch an ice blast. The blast shattered a dozen unarmored archers. Bristle gored and stomped two more. The remaining archers fled in terror to the top of the hill for cover behind the spearmen, who had formed a wall of shields to block the next attack. More missiles rained down and spearmen charged at her momentarily, but Sejuani smiled as the archers had missed their chance.

He looked back and saw his own warriors pass unhunted by the barrage of projectiles he had just endured. Sejuani didn't know if he would survive this day, but he had kept the oath he promised his people.

And that was the only thing that mattered.