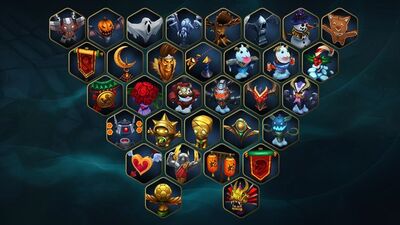 Zombie Sentinels placed by the summoner.

However, in the year following their initial release, Riot opted to make them permanent cosmetics.

Sentinel skins permanent in the shop:

These Sentinel Skins are only available through Hextech Crafting.

The following Sentinels are temporarily available during specific events or promotions, in the store, as loot through Hextech Crafting, or can be dropped from Honor Capsules. Only during these events can they be purchased with Hextech Gems, there is a chance to obtain the Sentinel Fragment or the Permanent Fragment of a Sentinel from a Chest or a Capsule, or they can be obtained by exchanging 3 Sentinel Fragments.

These Sentinel skins are not available and will not be available again.