Speed ​​of movement is a champion stat that represents the speed at which a champion travels across a map. One point of movement speed is translated as one game unit traveled per second (As a frame of reference, the basic attacks of

A champion with 300 movement speed (half the range of

Ashe) will take 2 seconds to travel that distance.

Each champion starts the game with a certain base movement speed, going from 325 (for example

Pantheon) units per second. For a list of all champions' movement speed, see Champion Base Stats.

This movement speed can be increased by flat and percentage bonuses and reduced by slows. These effects can come from neutral items, champion abilities, spells, masteries, runes, or buffs.

The movement speed of a champion is given by the following formula:

Then a limitation is applied to the result.

Fixed bonuses apply first, then additional percentage bonuses, then multiplicative percentage bonuses, and slows, then capping. Since bonuses and slows apply to each other, a champion affected by a 20% bonus and a 20% slow will still have a reduced net movement speed (for example, 300 × 1.2 × 0.8 = 288).

When pure movement speed is greater than 415, one of the following two limitations applies:

Both ranges see their reductions applied at the same time before being added together again.

These are the simplified formulas:

When the pure speed is less than 220, another limitation applies:

Slow Resistance is a stat that decreases the effectiveness of slows by a percentage. Currently obtainable only with the Swiftness Mastery Swiftness, with

Elixir of Iron and Frost Frost of

Sejuani. This statistic is accumulated multiplicatively.

The bonus given by these champion items or abilities are fixed increases to the champion's base movement speed. These flat bonuses increase the effectiveness of the percentage bonuses.

Buying boots from the shop grants the champion a flat increase in movement speed. Champions cannot purchase more than one pair of boots. The bonus of these is quite large compared to their cost and is essential for all champions.

All of the percentage bonuses listed below additively accumulate with each other.

Please note: Only the bonus movement speed effects of these abilities are displayed. To read more about each one, follow the respective links.

There are many ways to slow a champion's movement speed, the most common of which is to use champion abilities. For a full list of slows, see Crowd Control.

Base movement speed per champion

General guide on movement speed and slowdowns (Video in English) 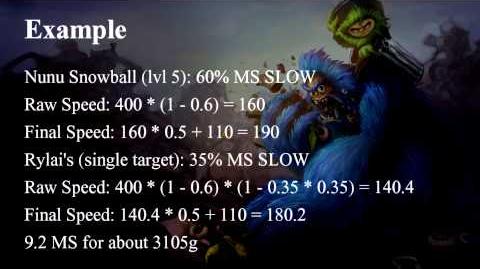