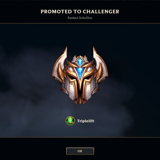 Hello, this is my first post on the page, sincerely I just registered on this page because I find the conversations that take place in the official LOL forum uninteresting, and I would like to try starting a conversation on this page just out of curiosity and to know If it's the same as the official one, now I'm going to start with what I wanted to talk about.

THE ELOBOOST   I wanted to talk about this, since the other day I was ranking (Preseason) with a friend, and we came across a vayne who said "Anyone who wants eloboost to talk to me privately" and looking at his departure history he had almost all won and with good scores, but no sanction, and I had games with positive scores with characters that I didn't even have with m5, which made me wonder if the reports actually work xD Starting from as far as I know, the elo boost is basically raising an account, It does not have much else, I know that there are two forms of eloboost, and they are the following:  2. The illegal EloBoost: this goes without quotes, since it is illegal directly, it is done in two different ways, the first is to directly pay someone to raise your rating, there are many pages of this, in Argentina there are even free market services eloboost! There are many people who do this and here are some examples of pages that offer these eloboost: EloBoost Mexico Easy Elo Boost (I think the best known) "1- Two-week suspension.

2- All rewards received in previous seasons are removed (Skins, Icons, borders, etc.) 3- They are disqualified from all rewards for the current season. 4- Those who carry out this "elo boosting" practice for the second time will be permanently suspended from the game. "

This was posted on the official LOL forum, but I feel it is a bit useless, as the way to report it is as follows: "If you suspect that someone is involved in MMR Boosting, a message to the Player Support portal is the best way to report them. " Honestly, this is very ineffective, as I reported many players with eloboost, and they continued to have their account, and seasonal rewards ... What do you think? I would love to hear your opinions, I think that riot games, should find another way to report these eloboosters and those who use eloboost ... Greetings and I await your comments!