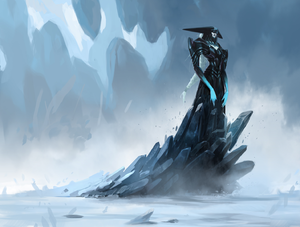 The Ice Daughter known as Lissandra

Each filtering bag Children of Ice are an almost extinct humanoid race that inhabits the Freljord, being

The Children of Ice were a powerful group of people who lived in the Freljord centuries ago. As it explains

Lissandra, the ancient people who lived in the Freljord were visited by mysterious entities known as the Keepers of the Ice. The Watchers were beings of great power and knowledge. They made those people immortal and gave them powerful magic in exchange for their servitude, naming them Children of Ice. Lissandra was known as the "Seeker", who served as a mediator between the two factions, passing orders from the Watchers to the Sons.

After a time, two leaders of the Sons, Lissandra's sisters: Avarosa (the ancestor of

Ashe) and Serylda (the ancestor of

Sejuani) started a rebellion against the Watchers, tired of their "slave" status.

Lissandra, however, remained loyal to the Watchers and continues to serve them to this day.

One fateful day, the Sons of Avarosa fought their last battle against the Watchers in what is now known as the Howling Abyss. In the end, the Watchers were defeated and thrown into the abyss, supposedly killing them. Anyway, according to Lissandra and suggested by Gregor and Lyte, they are still alive, and making their way to the surface.


After the defeat of the Watchers, the Children of the Ice waged a legendary war, known as "The War of the Three Sisters" where Avarosa, Serylda and Lissandra fought for control of the Freljord. The war eventually ended without a winner and with Lissandra murdering Avarosa, but the tribes continued their fights for centuries.

The Children of Ice later became extinct; most died in the rebellion against the Watchers and in the War of the Three Sisters, and with no Watchers to convert the people of Children of Ice, the race rapidly declined, leaving their normal human descendants in their place.

The Watchers and the War are now considered fairy tales, and they are supposed to have happened thousands of years ago.

Today, there is only one Ice Daughter alive, the Ice Witch, Lissandra, who has carefully concealed her identity by killing and taking the place of her successors.

Gregor, the grocer of Howling Abyss is the ghost of an Iceborn (as he claims). Avarosa killed him so that his spirit would serve as an eternal guardian of Howling Abyss and as a guide in case the Watchers ever returned.

It is speculated that

Braum may be a Child of Ice, as his story confirms that he does not age (to the point that stories about him go back 5 generations) and that he is incredibly strong, characteristics that would qualify him as a Child of Ice. If true, you have evaded the attention or corruption of

Lissandra, who may or may not be aware of her race, for a long time.

They can control and manipulate ice and can also manipulate its appearance freely. This is confirmed in the ability of

Lissandra to assume the identity of other people and in the giant and disproportionate body of Gregor.

Lissandra has the ability to feel her surroundings perfectly. It is speculated if it does so with the temperature or with the ice that is close to it. He developed this technique to be functional since it is Blind, but it is unknown if the ancient Children of Ice also had this ability.